More on The Move-Out.

Rumors Trump is starting to move out of White House as boxes & photo...

RUMORS are mounting that Donald Trump is starting to move out of the White House as pictures show boxes being taken from the West Wing. The snaps were taken on Wednesday and Thursday – just days ah… 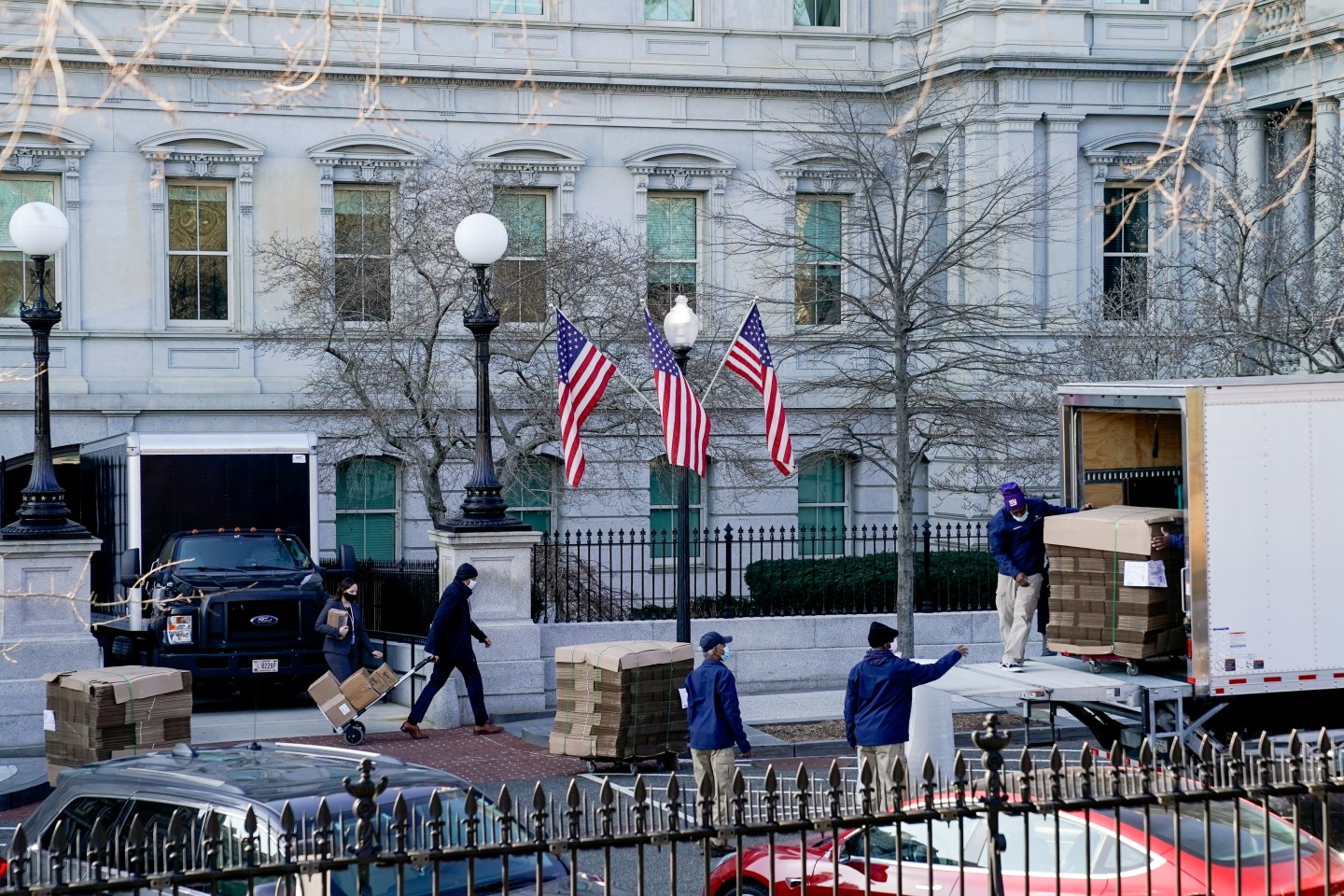 I, too, am a little puzzled by the “mess” left at the Obama house, but maybe I’d rather not know the details. Was an agent made physically ill by the Kushners? We’ll likely never know.

I’d bet that they don’t exactly have the Secret Service “A” Team on Javanka detail.

BTW, during his impeachment comments, Congressman Steve Cohen of Tennessee called him “Individual 1”. I feel vindicated.

I, for one, have long admired your stick-to-it-iveness.

The Pentagon has announced that the traditional Presidential Farewell Ceremony will not be held for Individual 1.

Cue more sulking in the residence and wallowing in self-pity.

More on The Move-Out.

If I was one of the movers there would be quite a few “accidentally” dropped boxes. Also, boxes marked “FRAGILE - THIS SIDE UP” would regrettably be found to read Ԁ∩ ƎpIS SIH┴ - Ǝ˥Iפ∀ɹℲ.

I hope there will an audit and a theft of federal property charge for everything they take.

You and I are of an identical mind.

I don’t think there’s much room in that truck for them to steal anything if they have to fit his ego in there.

You mean that you would leave the box in a condition that that would be legible? Not very imaginative of you.

Pre-stage all the boxes behind the truck, then accidently back over them while repositioning.

Too bad it’s not like UPS. While I was working in a trailer one time, one of the drivers wasn’t paying attention, and pulled the trailer that I was loading.

I was fine, but all the packages coming down the conveyor belt dropped about 10 feet onto the pavement outside the plant.

The White House removed a bust of Abraham Lincoln, carrying it out a side door at the West Wing.

he may not be able to raise enough money to set up a lemonade stand much less skim money off the top.

Question: can it still be called “skimming off the top” if the asshole in question is taking 75% of the money?

You mean that you would leave the box in a condition that that would be legible? Not very imaginative of you.

Thanks for posting this, - I actually saw this story come hot off the presses, they put out an abbreviated version on the ticker. I struggled with making the link work and ultimately linked to the full story, I guess. But even though I posted it I hadn’t read the whole thing.

Freaking lying liars that lie. They aren’t even trying anymore. Black is white, up is down, good is evil.

“Those Secret Service agents didn’t want our bathrooms. They like having to go to Obama’s garage to pee. I think they were liberals. We begged them to come in and use our bathrooms, because the Trump family and the law enforcement community has a long history of mutual support, respect and love”.

They always refused to use our bathrooms and insulted us by putting a port-o-potty in our driveway. It was like they were taunting us, telling us that they thought there was something wrong with the luxurious bath suite we had built just for them! We could never do anything right, they thought the water pressure in the Jacuzzi was too low so they got their revenge by port-o-potty. After Ivanka cried Jared took a stand and had the port-o-potty hauled away.

But they still wouldn’t use the authentic Roman bath palace that we built for them in our backyard, even though Ivanka tried to lure them in with homemade cookies and fresh-squeezed lemonade. They sneered at her and she thought they made faces at her when she wasn’t looking. It was downright cruel, she got a paper cut opening the homemade cookie mix and then lemon juice got into the cut and it stung for almost three minutes!

We spared no expense in making our Secret Service detail feel welcome, treating them as family, showering them with gifts and loving glances. Instead, they kept getting in their cars and driving all the way to the yogurt shop in town every time they had to pee, leaving us not only heartbroken but vulnerable to a terrorist attack. This should be investigated. I think the tall one is having an affair with the girl that works at 16 Handles. “

Man, I started to write one sentence and just didn’t stop. So much material.

Not sure how reliable Yahoo news is but this caught my eye.

Exclusive: Large bitcoin payments to right-wing activists a month before...

U.S. law enforcement is investigating whether a bitcoin transfer to right-wing organizations and personalities was linked to the Jan. 6 assault on the Capitol.

The White House removed a bust of Abraham Lincoln, carrying it out a side door at the West Wing.

Enquiring minds are asking… has trump been banned from ebay? Wouldn’t your mom like a bust of Lincoln for Mother’s Day?

Fine, assuming that this is true, I take back what I said.

Instead, load up a few trucks with garbage and fecal matter, and send them out, leaving the loaded up trucks around the side.

Once they have left, then go ahead and reclaim our country’s property, put the rest into a storage container.

From the article: “It’s possible the sculpture is a personal item Trump brought when he moved into the White House.”

It’s possible that Trump owned it because he was always a connoisseur of history and culture, and that it was his personal property brought into the White House by flying pigs.

I’ve seen pictures of Trump’s residences and his decorating tastes. If this was his it would have been gilded with gold spray paint. Trump makes Tutankhamun look like a Ludwig Mies van der Rohe minimalist.

ETA: No wait; I blame carrps for distracting me!

I blame my cousins named Wilkerson!

Damn. I always get it confused.

If this was his it would have been gilded with gold spray paint.

That’s EXACTLY what I was thinking!

It’s possible that Trump owned it because he was always a connoisseur of history and culture,…

Sprinkle some water on it. If Lincoln’s beard starts growing chia, it’s Trump’s.