I’ve been recently watching reruns of How I Met Your Mother and, along with my normal TV watching, I noticed something. From around 2005 to around 2015, it seemed like there was a lot of buzz around “pick up artists” and their movement, pseudoscience techniques, depiction in TV and film, etc.

Now while there have always been “ladies men”, “players”, “studs” or whatever you want to call dudes who got laid a lot. I’m sure many of them used manipulation and deceit prior to 2005. But I find this ten year period notably different in that people were buying into the theory that any dork could become one of those guys by applying behavioral pseudoscientific bullshit to attracting women.

…buying into the theory that any dork could become one of those guys by applying behavioral pseudoscientific bullshit to attracting women.

Case in point:
We have a poster here who spent his university years trying to figure out how to impress/pick up college-age women. He brought up many of the “Pickup Artist” techniques, and apparently had bought into many of them. And he’d start many posts (in MPSIMS?) asking details about these clichés about “girls” that he assumed were gospel truth.

… until we older/wiser/wokier posters set him straight, of course …

Many here tried to talk him out of of attitudes like “Well, since women are attracted to guys who ‘neg’ on them…” or “Given that Scotch is a more manly drink than anything sweet…” (I think he went on to try to make sure he was drinking something more “masculine” than anyone else at the table).

I’ve noticed that he’s not asking these questions any more. After he graduated, it was on to “What internship would make me seem more successful?” (I had hoped at that point that he’d found a wonderful, strong woman who was civilizing him…)

Just posted this today on social media in regards to the idea that nice guys can’t get dates because women like bad boys. I think it applies here, too.

What’s always bugged me about “Women don’t date nice men” and similar gripes is that it assumes that women are machines. If you could only flip the right switches, then you, too, can have your very own Woman™.

And that kind of thinking is probably why they can’t get dates.

Aha! Found the thread, and it wasn’t that old (early 2020). It started out by listing different Pick-Up Techniques he was studying:

Have you ever heard of these attraction/seduction programs? Mundane Pointless Stuff I Must Share (MPSIMS)

Pandora’s Box - Vin Dicarlo Tao Of Badass - Josh Pellicer IMO, the content is interesting, but it takes some time to master and learn the skills that they teach you.

Warning: You’ll be cringing as this guy uses terms like “getting friendzoned” while never using critical thinking to evaluate that point of view.

Oh, geez, we were pretty blunt with the guy. The very first reply:

These things are so lame. The content is not interesting, unless you consider astrology, numerology and horoscopes to be interesting. It’s all basically the same crap.

Women are not Pokemon. There are no tricks or skills involved in “catching” them. There is nothing to master. Just be yourself. The sooner you can do that and stop trying so hard, the better off you’ll be.

I replied:
I vote for change.
You have to. Or you will go through life self-centered and lonely.

Looking at the link, it confirmed that I knew who you were talking about in the earlier post. At the time, he came across to me as earnest, but entirely clueless about how to engage in actual social interactions with people (not just women).

Now while there have always been “ladies men”, “players”, “studs” or whatever you want to call dudes who got laid a lot. I’m sure many of them used manipulation and deceit prior to 2005. But I find this ten year period notably different in that people were buying into the theory that any dork could become one of those guys by applying behavioral pseudoscientific bullshit to attracting women.

This guy has been plying his trade since 1988 (I remember the Daily Show profiling him, back when Craig Kilborn was still the host. He came off as a real asshole. Beth Littleford interviewed him, and walked off. The Game: Penetrating the Secret Society of Pickup Artists

The Game: Penetrating the Secret Society of Pickup Artists (also known as The Game: Undercover in the Secret Society of Pickup Artists) is a non-fiction book written by investigative reporter Neil Strauss as a chronicle of his journey and encounters in the seduction community. The book was featured on The New York Times Bestseller List for two months after its release in September 2005, reaching prominence again in 2007 during the broadcast of the VH1 television series The Pickup Artist, which...

It also roughly corresponds with the rise of Tindr and other dating apps that pretty much remove the most tedious part of the art of the pickup; the process of elimination.

The episode was broadcast on 2/15/2016, so I’m sure it was scripted and filmed in 2015, right at the tail end of the movement going by the OP’s reckoning.

There is also an episode of *Bob’s Burgers". 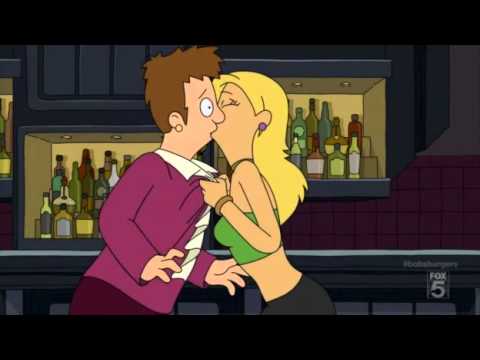 But I find this ten year period notably different in that people were buying into the theory that any dork could become one of those guys by applying behavioral pseudoscientific bullshit to attracting women.

I disagree that it only dates back to the early 00s. Those same old tricks and techniques were being bandied about on college campuses and in publications like Playboy at least 50 years before that. Hell, Eric Weber has made a living updating his seminal (heh-heh) book How to Pick Up Girls since 1968.

It also roughly corresponds with the rise of Tindr and other dating apps that pretty much remove the most tedious part of the art of the pickup; the process of elimination.

I would disagree. Dating apps remove IMHO the most interesting part - going out at talking to girls!

Hell, Eric Weber has made a living updating his seminal (heh-heh) book How to Pick Up Girls since 1968.

“But the girl — someone so absolutely sexy, so downright delicious-looking, you actually find yourself running to catch up with her. You’ve just got to see more of her long lean legs. Her fine rounded breasts. Her high, firm behind. For an instant you even consider rape.”

Oh yeah…We’ve all been there

Why would I need 2010 era advice when I have Mike Damone’s Five Point Plan?

Two, you always call the shots. “Kiss me. You won’t regret it.”

Now three, act like wherever you are, that’s the place to be. “Isn’t this great?”

Four, when ordering food, you find out what she wants, then order for the both of you. It’s a classy move. “Now, the lady will have the linguini and white clam sauce, and a Coke with no ice.”

And five, now this is the most important, Rat. When it comes down to making out, whenever possible, put on side one of Led Zeppelin IV. 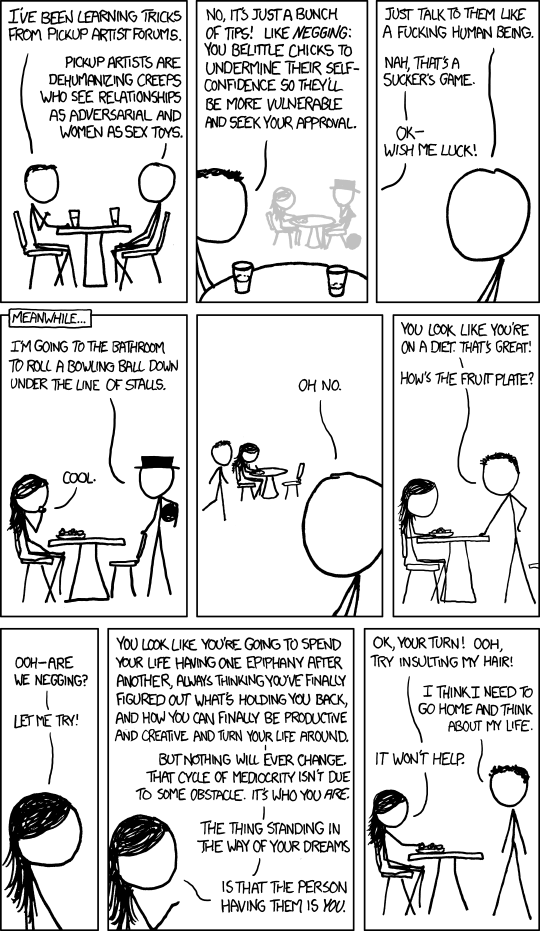 Son, don't try to play 'make you feel bad' with the Michael Jordan of making you feel bad.

It’s something I encountered as a kid before it became mainstream. I assumed it just hit a critical mass when nerdy people like me looking for help got older, and thus became viable to show up in mainstream pop culture.

Though I also consider that it took advantage of that feeling that a lot of people are still having now—an insecurity about change as (white cishet) male privilege is eroding.)

Jeffries, linked above, BTW, is a class beyond even what you see in the mainstream. His whole thing was about using light (and heavy) hypnosis to create attraction in women. When really the scam was that he was using psychological techniques to get people to buy his books. The idea of having a secret weapon that the more attractive people didn’t have has an appeal to the fantasies of someone who feels like they aren’t in control of their life. But ultimately, the real way it “worked” if it did at all was that it gave people the confidence to approach.

Techniques included things like saying the words “below me” in a way that sounded like “blow me” or saying “ha-PENIS” for “happiness.” Looking back at it, it’s a hoot.

(I never actually bought anything from the guy, but I devoured the forums talking about it. And the only advice I ever wound up following is the stuff about not being afraid of approaching people, and some ideas of how you could do so. Learning the “patterns” always seemed too complicated. From other “methods,” I learned that comedy was useful, and how to flirt. None of the outrageous stuff on those shows.)

Also, while I know I shouldn’t care since I don’t agree with the concept, it does irritate me a bit that pop culture gets “negging” wrong. Negging is always supposed to be a compliment, with a slight backhanded aspect to it. An example I heard recently on an older podcast (while mocking PUAs) was “I really like your shoes. They look [very slight pause] comfortable.”

That book may have publicized or popularized it, but since it documented an already-existing “scene,” it certainly didn’t originate it.

Google tells me he’s been interviewed on something called “Dating Skills Review.” Feel free to do more research, but I have no doubt everyone has better things to do.

I’d forgotten the idiotic puns/synonyms. The line that made Beth Littleford walk out was something like, “ I like to think of women as a… hole”, gesturing downward.

One thing to appreciate is that it wasn’t as toxic as it is now depicted. Or maybe it became more toxic over time?

I got into it around about 2005 I think. I bought a couple of books, went to one or two events in London. And…I just learned basic conversation and self confidence habits; skills which are still useful to me today, and not just in a dating context. You were just learning to present yourself better.

I’d moved on by the time I was aware that it had become a pop culture phenomenon, with a TV show and all that. And I lamented that it was then being seen as (and perhaps had become) silly jerkish tricks to try to compel women into bed.