Among other changes to make it less user friendly, in the new Android version of Firefox, SD threads now open in the black area at the bottom of the page and I have to scroll up to see the latest post.

Does it also happen in Chrome?

I don’t use Chrome. But it didn’t happen in Firefox before the new version was forced on me.

In the old Firefox, when I would revisit a thread I had been reading it would place me at the first new post. Now I get this: 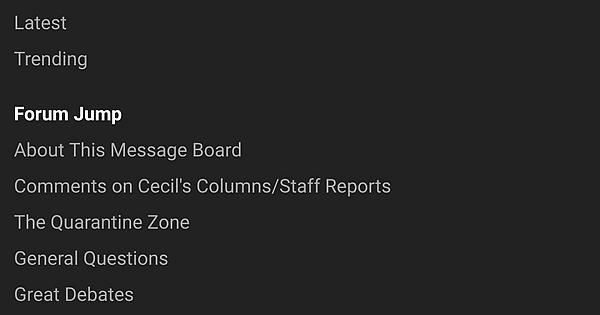 Well that sucks! I’d still like to know if this happens in mobile Chrome, though.

You didn’t even hit my issue. It’s that it takes forever to move the text box up, leaving it behind the onscreen keyboard. Heck, sometimes, it stays there.

I can’t tell you what happens in mobile Chrome as I won’t use a browser without adblock or extensions. But I bet these problems would have come up. I’m pretty sure “Firefox Daylight” was shoved out before it was ready due to the Mozilla layoffs.

You didn’t even hit my issue. It’s that it takes forever to move the text box up, leaving it behind the onscreen keyboard. Heck, sometimes, it stays there.

Also, non SDMB-specific, it can no longer keep up with my full-speed typing. So parts of words will end up jumbled together as it empties the character buffer out of the order that I filled it.

I won’t use a browser without adblock or extensions

I use pi-hole which gives every device on my (home) network ad-block with no software configuration required. It’s fantastic!

That doesn’t help when you are actually out and about and mobile outside the home on your mobile device, though…

Sorry about the Firefox mobile issues, it might be worth reporting them to Firefox as bugs, especially if these things don’t happen on Chrome.

Sorry about the Firefox mobile issues, it might be worth reporting them to Firefox as bugs, especially if these things don’t happen on Chrome.

Sure, but it’s still nice if you can see what the problem is and fix it. The keyboard problem seems hard, as I think it’s just Firefox not updating the display size when it should, and I’m not sure you can tell when the keyboard is opened to force it up.

But the fact it scrolls down too far might be mitigable, if it’s something like the scroll position being set before the page has actually loaded the content due to a race condition. Like throw in a check that the content is definitely there.

Just spitballing of course, as I don’t know what the problem is or how your code works. I code, but I haven’t made apps or anything. I mostly do userscripts–like all the ones I did when a poorly made mobile skin was forced on the old website. (I’m still considering making an “old smiley” script, but it’s a lot more complicated here due to the pages not being static pages, and I’ve not seen a big cry for them like I did when they replaced the smileys on the old board.)

Visit your interface preferences by clicking or tapping here.

Let me know if this is still an issue? Did Firefox update their mobile app recently, again?

Still the same issues. both the opening at the bottom of the page thing and the blocked reply box thing.

Did you try switching to the default theme in your user preferences? I roll hardcore defaults on all my systems as I get older, and here’s the default I have:

The best available theory is that this is a theme specific problem, so I really need someone to answer the question to be able to offer any further help.

Looks like maybe Straight Dope Light does not have either problem. The one I normally use (and will now switch back to) is Sam’s Simple Theme.

Good, that confirms our best available theory as to what the problem is. If you can indicate which specific themes have the problem, we can help more.

I believe he’s asking you to check all the other themes to see if the problem is in any other themes, too.

I believe he’s asking you to check all the other themes to see if the problem is in any other themes, too.

Yeah, I don’t care enough to do that. I was annoyed it enough trying it with one, doing his job for him.

Sorry, I wasn’t clear from what you wrote, I guess I missed that part. Humans sometimes make mistakes as it turns out. My apologies!

Also I personally hate Sam’s Simple Theme. That’s Sam’s responsibility, so it’s not something I tend to look at… if that helps with background at all.

What I like, especially as I get older, is absolute hardcore default mode all the time. (With an exception for dark mode, I do think dark vs light is a valid general purpose pref. Modern versions of Discourse will inherit dark mode from your OS preferences so this is becoming somewhat automatic as browser capabilities evolve.)