"Isn't it pretty to think so?"

It’s nice to think I could of been a professional dancer.

Or a famous muralist.

Or my kids were geniuses who cure cancer, or movie stars with loads of cash. Either one is fine.

Or my dog is best of show at Westminster.

My cats are lovable.

I dig up the key to treasure at Oak Island.

I finger the mob and stop heroin from getting in the U.S.

Can you tell?
I watched Ken Burns doc on Hemingway tonight, on PBS.

My cats are lovable.

Now you’re pushing the fantasy beyond all reasonable limits, Beck.

It’s nice to think that I could have been an NFL placekicker.

Or a published author. (But, wait, there’s still time!

And so is the story of my life. What could have been.

“I drink to make other people more interesting.”

For sale. One fish. Mostly eaten.

I was destined to be a prima ballerina! And a famous author! And a rock star!

OK, maybe in one of my later lives it’ll all come together. For now, retired engineer ain’t too bad.

This could easily morph into “Dreams you could still pursue”:

I mean, it’s too late to be an Olympic athlete… but not in Curling.

It’s too late to be a ballerina… but not an “Hilarious Dad Dancer on YouTube”.

A muralist is still doable. Maybe not “famous”… except you could become an Anonymous Rural Banksy.

I watched and enjoyed that too. I can’t say for sure I ever read a Hemingway book but I did like the KB doc.

As a gun enthusiast I took note of this pic.

EH with drink in hand, child close by and a Thompson Submachinegun cradled in his lap. 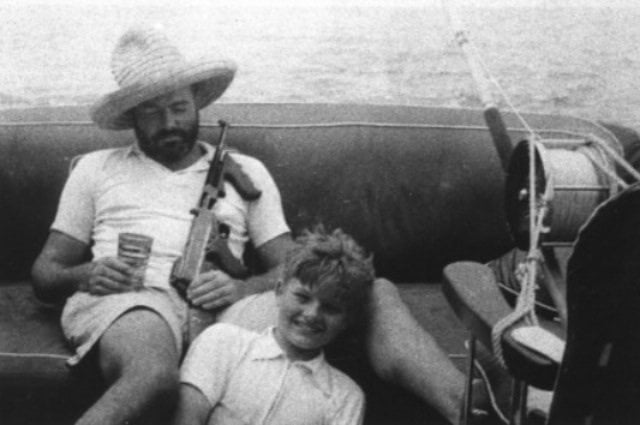 A song not for now you need not put stay,
A tune for the was will be sung for today.
The notes of the does not will count as the does,
Today you can sing for the will be that was.

As a gun enthusiast I took note of this pic.

I love that pic, too. And my Thompson is missing the same two pieces! I could replicate that shot, but my kid is too old now.

You told me you were once a semi-pro ballerina. To go fully pro would just require you to dance twice as much, right?

Well, dance faster, be less tall. Have feet that aren’t jacked up. Be 20 yrs younger.
Get hired by a company.
Seems that ship has sailed.

I think it is mostly scary to think about what could have been.

The documentary said that Hemingway’s mother Grace earned more as a teacher of voice and instrumental music than her physician husband Clarence earned.

This strikes me as unusual.

Grace did give up a promising career as a performer to marry, so she might have been really talented, and thus an outstanding music teacher.

It also wouldn’t surprise me to learn that physician might have been in a lower income percentile among occupations ca. 1900 than it was by mid-century, with the growth of professional licensing and the like.

I was born around 1960, and I don’t remember private music teachers being better paid than, say, school teachers. Was that not the case earlier in the century?

Mods, I considered creating a new thread in GQ or IMHO on this, but I figured that people reading this thread would already be familiar with the specific facts of this instance, so more interested in commenting. Move as you wish.

A cat has absolute emotional honesty: human beings, for one reason or another, may hide their feelings, but a cat does not

I was a Theatre major in college, and while I knew there was no way I would make it as a professional actor I had a plan that would satisfy my acting bug. After getting my BFA degree I was going to get a Master’s in Library Science, which I would use to get a job as a public or university librarian, and then get involved in a local community theater. I was even accepted at Catholic University of America in Washington DC (my department head’s alma mater) but unfortunately couldn’t afford to attend.