Tonight brings the two-hour premier of 24: Live Another Day, and here’s the thread for making all the posts with all the spoilers, speculations, and sputterings!

Brought to you, as in days of yore, by the 24 Club. Yeah, it’s probably just me, but it sounds better when I put on like there’s others.

I… enjoyed the heck out of that. Jack being all grim and noble, Chloe hacking things, protocols and potential moles everywhere; it’s like the best of 2006 all over again. Though I’m kind of sick of the senile President (Neo-Reagan?) thing already. On the other hand, one thoroughly fast-forwardable plot line is 24 tradition, at least for me.

Could Sarah… errr… Kate… be any more of a “Jack Bauer’s future ally then girlfriend then dead girlfriend”?

That was good twisty fun. I don’t feel like they’ve taken very good advantage of being in London, yet. When CIA agents want to go out and violate people’s rights without trial they just do it, even though they’re not even in their own country, which I think is a bit of a missed opportunity. It would certainly be more interesting if they had some local British intelligence people who they had to liaise with who didn’t quite share their agenda.

I had completely forgotten precisely what went down between Jack and Audrey that left her comatose. Turns out it was mostly The Chinese who were responsible.

Some fun cast notes:
-The drone pilot being framed is played by John Boyega, who will be one of the stars of the upcoming Star Wars Episode 7
-The surly black CIA agent is played by Gbenga Akinnagbe, who was Chris Partlow on The Wire
-The head of Chloe’s hacker collective is played by Michael Wincott, who’s been (mainly villains) in a bunch of things, including Alan Rickman’s sidekick in Robin Hood, Prince of Thieves
-And of course that’s Stephen Fry as the British PM, and the mysterious female villain Margot is played by Michelle “Catelyn Stark” Fairley

When CIA agents want to go out and violate people’s rights without trial they just do it, even though they’re not even in their own country, which I think is a bit of a missed opportunity.

Well they did give a bit of a handwave to this with Bratt’s line about “we have consular status” (as in, it’s as if they were on embassy grounds). That’d cover what happens AT the office, anyway, though you’re right what they go out and do needs to have some ramifications or it might as well be in Wichita.

May not be a 100% get out of jail free card, but it does give’em a fair amount of leeway even in the real world.

I have to admit, I had a nostalgic smile at the pacing. Within an hour of the hijacked drone strike the news was everywhere and the pilot practically tried and convicted.

I forgot how excited I get when here those beeps!

I forgot how excited I get when here those beeps!

My CTU ringtone makes sense once again! But… a twelve episode 24??? So Jack gets to pee & sleep?“What they’ll be able to do is go in chronological order of the day, but skip hours … Now we’ll get the best part.”
Aha! So they admit that previous seasons were half filler!

Aha! So they admit that previous seasons were half filler!

Anyways, good start. Totally 24. Let’s hope they keep it up and don’t rape whatever period of my life I was at 6 years ago.

Aha! So they admit that previous seasons were half filler!

Eh, probably just means we’ll only follow the one plotline. In addition to there always being a mole at CTU and a traitor in the government, whenever Jack eliminated one threat he found a thread leading to the next “Cough, gasp - you think you’ve won, Bauer. We’ll still…urgh!”

And I’m calling it now - Kate Morgan’s husband was framed to throw suspicion on her and remove the one competent CIA op in the UK before the plot started, and Jhoe will find proof.

Rembert Browne at Grantland did a fun recap article: 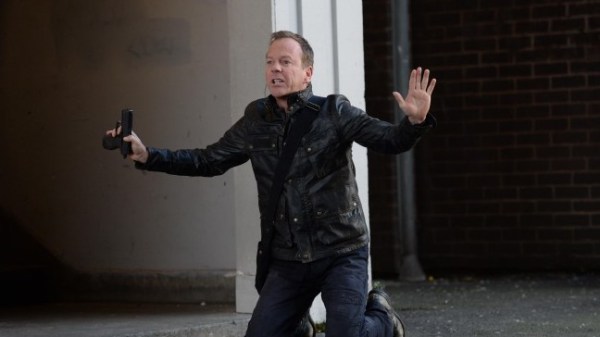 JACK BAUER IS IN LONDON AND HE IS MAD AND HE HAS A ROBOT HAND.

So, did any other old Browncoats have a Firefly moment with that comm check?

I suppose I’m in the minority because I’m disappointed by the new series thus far. I was hardcore fan of the original ‘24’ and just finished rewatching Seasons 1-6. I’m not sure what I expected from the new show, but perhaps I need to examine and adjust those expectations?

I’m anxious to see who else from the original series, if anyone, will reappear at some point in ‘Live Another Day’. They got the two essential characters back (Jack & Chloe) as well as Senator (now President) Heller and daughter Audrey Raines (who I find annoying). I’m trying to think of any previous characters that they could bring back (but I lose track of who is dead, in prison or MIA).

Maybe Nina Myers didn’t really die when Jack shot her? Or maybe Karen Hayes could return in some capacity? Or even Martha Logan (Jean Smart) might show up to hurl a knife into someone’s chest again?

I would love to see Aaron Pierce.

What about Mandy, the frequently naked lesbian assassin?

Wouldn’t be 24 without the Bauer bag. Can’t really take Chloe seriously in her emo outfit and makeup, you’re a woman in your forties not sixteen and mad at daddy.

24 is pretty much the perfect choice of show to revive after leaving dormant for a few years. I enjoyed the show, but by the end I had kind of had my fill and ended up not bothering with the last season. After a few years break, though, I am totally on board with another round of its pulpy silliness.

I am choosing to believe that mysterious villain Margot actually is Catelyn Stark, magically transported to our world to bring Westerosi scheming to the highest levels of power in our era. I will continue to believe this even after the show most likely pretends to reveal her as wife of PM Stephen Fry.

The not-so-subtle political commentary that was emblematic of 24’s original run seems to be even less subtle here - in just 2 hours of airtime, they’ve managed to reference/satirize drone warfare, Benghazi, Ed Snowden, the idea of a president with Alzheimer’s, “enhanced interrogation” (which Jack was doing before it was even a thing), and the thread about assassinating the president via drone that we had last month.

One amusing Easter egg I noticed was when Chief of Staff whatshisname was looking at Jack’s file and it had a list of all the people he killed over the series run, and additionally listed his date of birth as December 21st 1966, the same as Kiefer Sutherland’s real life birthday. (Of course, if you follow the internal timeline of the series, these events are happening sometime in 2022, which means that Kiefer is playing a character eight years older than he actually is.)